It’s been kind of serious on the blog the past couple posts so I wanted to keep things light and share how I celebrated Eid al-Adha yesterday! Eid al-Adha is a major holiday celebrated around the world by Muslims. It’s a celebrations of Abraham’s and his son’s willingness to sacrifice in obedience to God and God’s ultimate mercy. If you have any questions about the holiday or Islam in general, please let me know and I’ll do my best to answer your questions!

Unfortunately, I wasn’t able to skip classes but decided to dress up a bit since it was Eid after all! I paired this royal blue top with black pants and the Steve Madden booties I got over summer. I don’t wear this top very often but I loooove the color. I love the way it pops and it looks great in a lot of different combinations. I also like the almost peplum-like way it falls.

For details, I wore a this baby pink/peach with gold accents statement necklace I bought a couple years ago to wear at my bridal shower. It’s been one of my go-to ‘dress up an outfit’ jewelry pieces ever since. It’s also a very versatile piece but I don’t wear jewelry very often so it definitely feels like too much for just a regular day at school. It’s not clear in this photo but I also wore the watch I usually wear on clinical days.

Hubby went to his parents’ the night before since he was spending the morning with them. I obviously didn’t want to start my morning celebrating this major holiday by myself so I stopped at a donut shop and picked up a box of donut holes for my School of Medicine family. It’s not Eid without donuts! 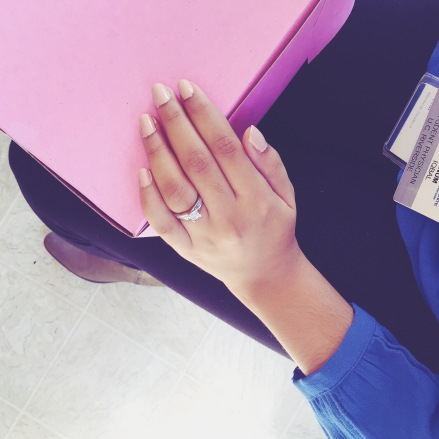 With the rampant Islamophobia in the world right now, I try to take advantage of every opportunity I can to do dawah and educate people about Islam. I forgot where I read this statistic but a survey done showed that about 50% of U.S. citizens say that they’ve never met a Muslim before. And considering how many Muslims there are in this country, I find that hard to believe. I think it’s more that people know Muslims but just don’t know that they are Muslim. It’s obviously not an easy thing to open up about considering all the hatred but I’m lucky to live in a very diverse community that’s mostly respectful of people who are different. I think that many times people may have questions but are afraid to ask because they’re afraid of coming off offensive or ignorant but as we’ve all been hearing since grade school ‘no question is a stupid question.’ So I wrote the note pictured below on the box of donuts and a lot of my classmates did actually ask me about the holiday, which was really great!

We had a few hours of lecture yesterday on microbiology and congenital abnormalities. For the second lecture, the physician invited a patient of hers and his mother to come speak to the class and they graciously agreed. It was really interesting to hear about the condition from the patient’s and caregiver’s point of view and it definitely made the whole learning experience more tangible. As we go through medical school, especially the first two years, it’s easy to forget that all this pathology we’re learning is actually impacting fellow human beings. I’m grateful to be studying at an institution where they really try to remind us of that as often as they can. After classes we had lunch and I tried to catch up on one of the lectures I missed this week and discussed the elections with one of my classmates. It’s so wonderful to go to school with such critically thinking people – definitely makes for a lot of great conversation. We ended the day with doctoring, which is the class where we learn how to interview patients in an empathic and culturally sensitive way. The case was a continuation from the previous session a few weeks ago so it was nice to see more about following up with patients since most of the cases thus far have been more of a one-time thing. My classmate, who conducted the interview, did such a phenomenal job. It’s these things, in the midst of medical school madness, that make me feel so incredibly blessed to have this opportunity with some of the best people I’ll ever meet.

After class I rushed home to get ready and head over to my parents’. Hubby was home so finally got to see him too! Wore this burgundy and cream outfit that my mom sent over with my brother a couple days ago. I wasn’t able to get any good photos of the outfit but I thought I’d share this silly one of me trying to convince hubby to take a photo heh. I think he’s much happier being on the other side of the camera taking photos for the blog but it’s all good.

It was nice to take a couple hours off from studying and just spend it with some of the people who mean the most to me in this world. I don’t think I’m ever going to fully appreciate how blessed I am to be able to continue my education so close to my family.

Finals start in about ten days and to say that I do not feel prepared is such an understatement. But I’ve been spending a lot of time this block working on my study strategies and actually studying ‘smart’ instead of just studying ‘hard.’ I’ve talked to a lot of people about how I feel like I never perform at the level of my knowledge on exams and they all consistently tell me how important it is to be confident and do what I can to curb my test anxiety so that’s what I’ve been working on. I’m trying to be kinder to myself and reinforce the idea that I’m here because I deserve to be and I worked hard to get to where I am today. Hubby is so incredibly helpful in helping me hold onto that in the times I forget. So grateful for a partner who knows me so well and is constantly cheering me on, even when I don’t believe in myself.

I hope that you all have a wonderful weekend!  I’m likely going to be holed up at home or at a coffee shop (or some rotation between the two – anyone else get super restless when they’re studying?) reviewing everything for finals. Positive vibes and prayers are much appreciated.